How I deal with rejection

A couple of weeks ago I got back on the submissions train and sent my 12 Days of Krista May Rose manuscript off to a traditional publisher.  Having done a bit of research into publishing, I've noticed that not many places are interested in taking short stories so when I came across a publisher who has previously published short stories I thought that I should give it a go.

Thank you for sending us your manuscript for consideration.

I’ve now had a chance to look at this. Although it’s well written, the book’s themes and subject matter don’t fit our profile and its hard to see the book fitting in with our existing list.

I’m sure that a more mainstream press will pick this up, or a press that could give it a serious pre-Christmas push. Thank you very much for the opportunity.

Obviously I was a bit deflated when I read this.  I know there are hundreds, if not thousands, of people out there who are trying to get books published and having no luck.  I also know that some of the greatest authors received rejection after rejection before having their work published.  But sometimes it feels like a never ending spiral downwards.

About a year or so ago I was going through some personal problems, and found myself to be extremely negative about any situation I found myself in.  Even when other people pointed out the positives I refused to see them.  I like to think that I'm better now.  This rejection, although crappy, isn't the end of the world.  I self-published this particular book through Createspace and it's available to buy as a hard copy or an e-book from Amazon (UK, US, and Europe), and while it hasn't been selling in its thousands, it has been selling - and not just to friends and family.  I have also sold the paperback at Christmas fayres and at Lowestoft Library Literary Festival.

I admit, I used to say that self-publishing was for those people whose books weren't good enough to be published.  This was before I'd taken a step inside the world of publishing.  It's not as easy as I thought.  But self-publishing is fairly easy and is becoming a more acceptable way of getting your work out there.

So I could have wallowed in the news that one publisher didn't want my work, which is what I probably would have done a year ago.  Instead I'm going to continue to promote my (self-published) book and sort out a lot of work I have floating on my computer and put those in (self-published) book form.  I write things for them to be read.  If I have to self-publish in order for them to be read, then that is what I will do.

So if anyone wants to buy a little literary stocking filler, please pop over to Amazon to ensure delivery before Christmas! 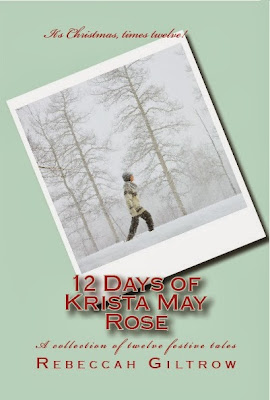 Posted by Rebeccah Giltrow at 14:03