Tweet
We had another great meeting this week, with 9 members coming along.  We had been meeting for an hour, but I felt that it was too short to really get a lot of writing and reading done, so I suggested lengthening the session.  Everyone was in agreement, and one member suggested that we go from 10:30 to 12:00.

Homework from last session was to randomly pick a Picasso portrait and use that as a basis to write something.  Everyone approached this task from different angles, from writing from the point of view of the model, to the point of view or the canvas, to factual pieces about the artist, to fictional pieces inspired by the image, to personal responses to the picture. 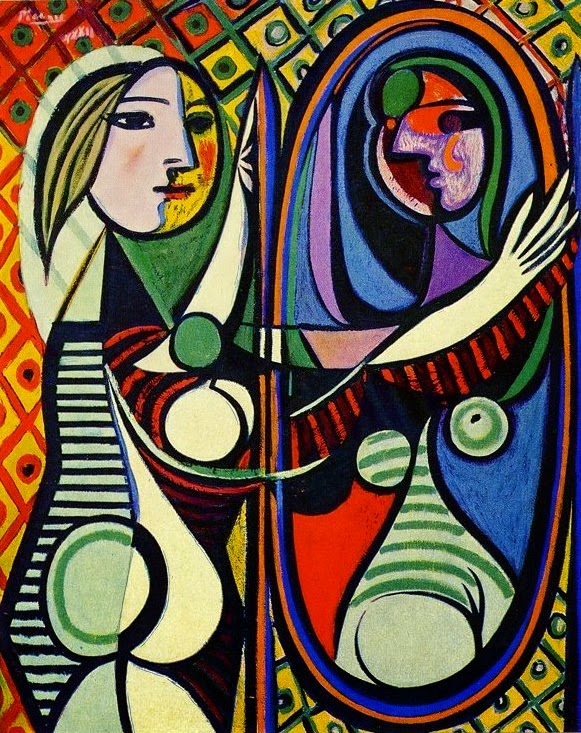 I mean, how does it feel to be real?  To be out there in the world?

Ok, let me try to explain.  What are you doing right now?

Yes you are.  What are you doing?

Right.  So what does that mean I’m doing?

I wish that was true, but it isn’t.

It’s not the same hand.  Move your hand again.  The right one.  And look closely at my hand.  It’s not my right one.  It’s my left.

Heh, so it is.  I’d never noticed that before.

No, you don’t notice much.

Is it?  Is that really how mirrors work?

Yes.  Everyone knows that.

How do they know?

Ok.  Turn around and look at the wall.

Now turn back and face the mirror.

What was the point in that?

What did you do?

And what did I do?

You turned around too.

But the thing is, I didn’t move.

Of course you did.

How do you know?

Did you see me turn around?

You just had to.

Because that’s how it works.

What’s that got to do with this?

Weren’t you ever taught to think?  To question?

I never thought I’d need to question the workings of a mirror.

Why would you?  It serves a purpose, and when you’ve finished with it, you forget about it.

Everything you see in this mirror is a reflection.  It’s not the truth.  It’s a palatable version of the truth.

I don’t think you could handle seeing the real you, the way I see you.  You’re more concerned with the way you look than the way you are.

Are you saying that I’m vain?

I’m saying it how I see it.

You don’t know what you see.  You’re just a reflection, remember.  You’re not real.  You don’t exist in the real world.  Everything you do and everything you are is because of me.  I move my hand, you move your hand.   And when I turn around, so do you.  You’re nothing without me.

What would you do if I left, right now?

In the session we spoke about writing 'faction' which is a combination of fact and fiction.  A lot of writers draw from personal experiences, but fictionalise everything.  Writing faction means that a real person will exist in a fictional setting, or fictional people will exist in a real setting.

We each wrote a piece of faction, about a real person in a fictional setting.

Tony looked at himself in the bathroom mirror, peering closely at the hair growing out of his ears.

'Why does hair sprout out of every part of my head other than the top?' he pondered.

The reflection of the clock behind him caught his eye.  He was late, as usual.  He splashed some water on his face and walked downstairs, drying his skin with his sleeve.  An alarm sounded.  He was going to be in trouble.  One more late mark against his name and he would be up in front of the commander.

Tony put on his hat, to cover his hairy ears, straightened his tie, and placed his palm on the pad by the front door.  The alarm stopped and the door slid open.  Sergeant Noble was waiting for him, with a strong hand held at his temple in salute.  Tony reluctantly raised his hand and touched his eyebrow before waving at the young boy standing nervously in Noble's shadow.

"And who do we have here?" Tony asked.

"Corporal Andrews, Sir!" the young boy asserted, with a salute.

"And what can I do you for?" Tony asked.

"He'll be accompanying us on patrol today," Noble said.

"You're late," Noble said, walking away from Tony's house.

"When am I never not late?" Tony asked.

"It doesn't set a good example for the new recruits," Noble tried to say out of Andrews' earshot.

"It's ok, Sir, I'm always late for everything," Andrews said, perking up.

"Andrews!" boomed Noble.  "You will only speak when spoken to!"

"Leave him alone, Noble.  Remember, you were new once," Tony said.  "So Andrews, so you like football?"

"He was born way after the collapse of England, so there's no way he'd remember football," laughed Noble.

Homework for next time is to go to a graveyard and find a name that stands out.  Look at all the information (their age, if they had family buried there, etc.) and write a fictional story using this information.

Our next meeting is on Wednesday 18th June, at Kessingland Library.
Posted by Rebeccah Giltrow at 15:34 No comments:

Tweet
Due to work, I was unable to hold Lowestoft Library Teen Writing Group for a few months, but with a change of day we are all back up and running.  We now meet on the first Wednesday of each month, 5-6 pm, in the library cafe.  The age limits have also been extended from 11 years old to 18 years old.  This is because I received a lot of interest from younger writers, and I wanted to be able to provide a writing community for them too.

So now the group has 7 members, which is great.  All girls though.  It would be nice to see some boys who want to take part, but I certainly can't complain.

Another change is that I've stopped giving homework.  A couple of them are taking exams now, and what with school work for the others, they're not going to have time for writing group homework too.

So we met on Wednesday 7th May, and 6 people turned up.  I know they're young, and fairly shy, but I want them to have confidence in their work and their ability to share.  Last time I asked them to bring along some work to read out to the group.  Two girls did this, and I was so pleased with what they had written and the fact that they were brave enough to read it out.

In the session I gave everyone a copy of a story plan. 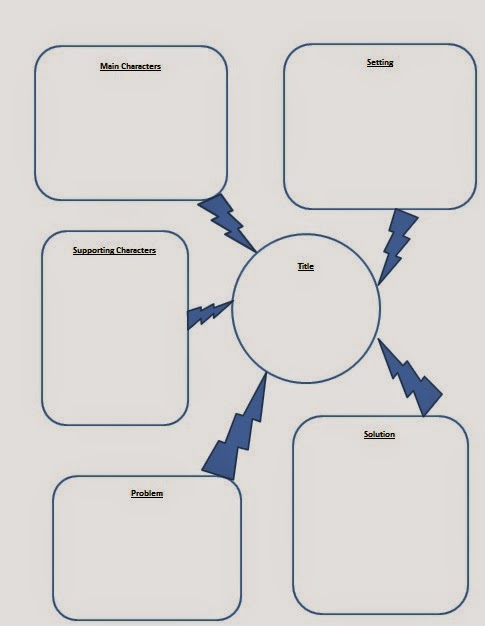 I asked everyone to fill in one box and then pass their paper on to the person sitting on their right.  We carried on doing this until we had filled in all the boxes.

I ended up with this outline for a story -

Setting
A city in the shadow of an active volcano, with a corrupt government & eruption day nearing.

Main Characters
Shana - Oblivious to everything.  She thinks the volcano won't erupt.
Emmy - Determined to get Shana to realise that the volcano is going to erupt someday.

Supporting Characters
American police officer - Ignorant to the corrupt government.  Aims to help everyone he can, but isn't too smart.

Problem
Emmy has an evil twin, is taking over the world, trying to get Emmy to be evil too.  Only one thing can stop her, has no idea what it is.

Solution
Hire a vigilante spider to conquer all foes and problems.  He returns to the centre of the earth.  Can be called upon whenever Earth is in need.

Although there wasn't much time left, we all started to write the story from our plans.

Shana sits on her balcony, staring out at the mountain in the distance.  She smiles at the occasional black puff of smoke which pops out of the top.  She sees the mountain as a friend, someone she can confide in.  She knows that the mountain won't judge.  She knows it won't leave her.  Her family left her a long time ago.  They left her alone, running scared, believing that the mountain was a volcano and that it would erupt soon.  Shana didn't understand the panic.  As soon as it started smoking, six weeks ago, people started to leave the town in their droves.  But Shana didn't believe anything bad would happen.  The mountain was her friend.

If everyone wanted to finish the story for homework they could, but they didn't have to.

Our next meeting will be on Wednesday 4th June.
Posted by Rebeccah Giltrow at 14:43 No comments: