Last night was February's meeting of Lowestoft Library Writers' Group.  In January we had a couple of pieces of homework.  Firstly we had to write a short biography to go on the new website.  The website can be found here - http://lowestoftlibrarywritersgroup.onesuffolk.net/, and my biog can be found on the 'Members' page. 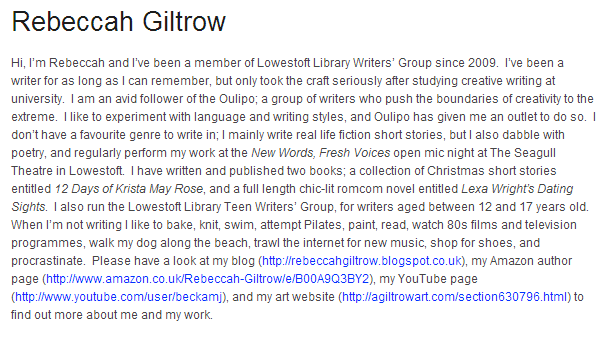 Our second piece of homework was to write something else for the Writers' Group anthology, about the local area.  We had already written one piece for October's homework task last year, but it was decided that each member of the group would have two pieces in the anthology.  I wrote a short piece of prose about a World War II pill box on Kessingland beach for my first piece.  So for this months' homework I thought I would bring along a poem.  I did kind of cheat, because I wrote this poem a couple of years ago, but it is about the local area so it would fit in with the rest of the anthology.

East Coast Boats
The staggered ships
make jagged shapes
on Kessingland's horizon
connecting the sea,
like a jigsaw piece,
to the sky

Their silent lights fade
like the last falling sparkles
from a New Year's firework
and, as though an unknown hand
snaps shut the tabs
on a clip lock lunch box lid,
the ships slip over the edge
of the world 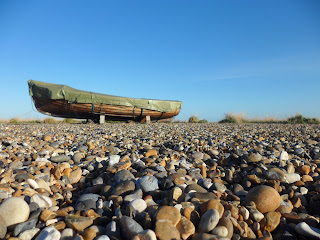 We spent the main part of the meeting discussing the upcoming anthology and deciding on the cover.  We also read out our homework pieces.  We didn't do any writing in this session, but it was very productive as we have the majority of the anthology sorted; we just need to put it together and proofread the final copy.

Homework for the next meeting was set by Di, who brought in some pictures from a calendar.  We each chose a different picture, and we have to use that as inspiration to write a poem/piece of prose.