I'd like to welcome you to my interview with writer, Alan Markland.  Enjoy.

Hello Alan, can you please introduce yourself?

I am Alan Markland. My home is in Wigan, Lancs, when I am not in my caravan on Pendle Hill writing.

I wrote my first story as a child at school.

A teacher at school read out the tales of Jack London and I think I realised then that writing was an adventure. The same teacher praised my first story and that was good enough for me.

I have been to several over the years. I am a member of ‘Bank Street Writers’ at Bolton.

Why do you attend a writing group?

I am reminded how bad writing can be, especially poetry and including my own.  And how wonderful.

What is the most valuable thing you have taken away from your writing group?

I am always inspired and encouraged by the enthusiasm.

What genre(s) do you write?

Fiction, all and any, excepting any kind of fantasy. I know it is ultra popular but, like much else that is popular, it is juvenile, dumbed down and boringly banal.

Apart from fantasy fiction, is there anything else you don't enjoy writing?

Popular science fiction. (I exclude Asimov, A. C. Clarke and HG Wells for they are proven prophets.)

All those except song lyrics. If I were to do the latter I would say ‘Yeh, Yeh, Yeh! And Babee!  lots of times to the tune of a banging drum and, because I could not think up a last line, I would do a fade-out.

I think if I ever had to write a song, it would probably be a silent instrumental!  Have you ever had anything published?

I have been published in UK magazines; Ireland’s Own, Choice, Peoples Friend. And worked as freelance features writer for ‘The Sunday Circle’, a Maltese glossy, producing fifteen hundred words every second month for two years. I have self published a collection of short stories: ‘Plate Pies’ and, recently, a novel entitled ‘The Reel Of The Hanged One’ I have also been included in a couple of Anthologies. Please see: my web sites: www.kalabashwriter.vpweb.co.uk     and    sbpra.com/alanmarkland

I am on Amazon.com and Amazon.co.uk and also on their Author Central site.  I recently completed a factual work; a History of The Youth Federation of Cheshire, Warrington, Wirral and Halton. For that organisation. I am currently writing ‘The Search for Lizzie Ramsden’, a history of the life and times of a Music Hall Artist. Lizzie, my grandmother’s sister (1866 – 1940) was a popular dancer appearing in over a hundred venues here in UK. She also worked for Oscar Hammerstein (the 1st) at his New York Olympia. I will present this story to an audience at Bolton Central Library later on this year when I will also promote (and hopefully sell) my two books . (Lizzie is also a character in ‘The Reel Of The Hanged One.’)
I am also engaged in a work entitled ‘Bolton’s Forgotten Fallen’ which charts the death of many Bolton men in the Battle of Chunuck Bair, Gallipoli, in WW1. This will be ready in time for the 100th Anniversary of the battle in about two years time.
Two other jobs in progress are a semi fictional account of my life and a volume of my various travels, alone and by odd means to odd places. 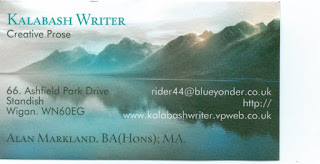 Wow, where do you find the time?!  Have you ever received any rejections from agents or publishers?

Hundreds! And I could paper my walls with some very nice rejects.

You mentioned earlier that you have self-published.  Can you tell us a bit more about that?

I have used self publishing in its various forms from pure Vanity to ‘Collaborative’.  I once took part in a scam where a couple of us sent reams of rubbish, including some blank pages, to one of the more infamous houses. Our work was praised and ‘accepted’ for publication. These companies are not interested in the writing, only in what they can sell to the writer by various innovative means, all of which are readily available to the writer him/herself. However, at my age of nearly eighty, I can hardly wait for MacMillan or Random House to grab me by the Biro. And I have found that, used judiciously and for the bare minimum requirements, excluding such things as ‘International Book Fairs’ some of them are as good as I am going to get.   My ‘Plate Pies’ is on Amazon Kindle and I expect my novel will be too. I personally dislike them.

Hemingway primarily and before him the Russians: Turgenev and Chekhov.  Conversations overheard, or better still half overheard.

Yes!  The half overheard conversations are the best!  Or one sided telephone conversations.  You imagination can run riot!  How do you come up with your characters' names and personalities?

They are usually people I know, including me, suitably embellished. Time or age setting play a big part. For instance my collection ‘Plate Pies’ is set in the late 1940’s, early ‘50’s so my characters have names like Ada or Sam. Whereas my hero in ‘The Reel...' is Rob.

I write all the time, on and off, but every day and especially during the night. I find my travel oils the wheels although I rarely write about where I am at any one time. I wrote a story for SSAAFA recently, which was performed at their 125th Anniversary. It was about three soldiers ruined by war and I wrote it partly on a sandbank on the river Niger while on my way by canoe to Timbuctou. (Incidentally and perhaps prophetically, a Coup broke out before I could reach my goal and I spent a couple of weeks in a refugee camp In Mauritania) Which I shall of course write about sometime.

Do you start out with a complete idea for your stories, or do you just start writing and hope for the best?

I sometimes know the end but mainly a spark occurs (I know not whence) and I let the tale tell me what to say next. Basically, I play ‘what if’?’

Do you have an editing process?

I read my dialogues out loud. I edit myself first, then Christine, my partner, has a go. She is a grammar school girl, very particular and I trust her not to gentle critique.

What do you enjoy the most/least about writing?

A well known writer once told me: ‘When you have done sharpening your pencil, stopped thinking about it, written copious notes and adjusted your writing seat to the height of your favourite writing table – you will have to sit on your bottom and  just do it.’  When I do that I enjoy the thrill of finding out what comes next.

How important is it for you to share your writing?

A story is not a story until it is read.

Have you ever attended an open mic event for spoken word performers?

I attend a local meet sometimes of ‘Write Out Loud’ where we do ‘Poetry Shouts’.  I love it and have done some of my own.

What is the best piece of writing advice you've been given?

(Have a looksee here http://en.wikipedia.org/wiki/Iceberg_Theory for more information about that - RG)

What advice could you give a new writer?

Be sparing. Write obliquely. Look at things from another angle, briefly, as if out of the corner of your eye.

What types of things do you read?

A glance at my bookcase (and this is in my van) sees: Rogets Thesarus. The Oxford Concise. Two of Richard Dawkins.  Route 66 – a Travellers guide. A Dictionary of Modern history. The Rubaiyat of Omar Khayyam. Alan Bennet. Brendhan Behan. And some Hemingway – I think his short story  ‘Hills Like White Elephants’ is the most beautiful, tender, concise and accurate tale in the English Language. My early writing was full of Dylan Thomas so I have had to watch it! But I have learned to be influenced but not dictated to by who and what I read. Note: While doing my MA in Creative Writing a couple of the students told me they never read at all. For me the two necessarily go together.

That's shocking!  Thankfully when I studied my M.A. in Creative Writing, we had a long reading list, so it was necessary to read as well as write.  If you could have written anything, what do you wish that could have been?

‘he kissed her once by the pigsty when she wasn’t looking and never kissed her again although she was looking all the time.’

It occurs to me (all writers are cynics) that your very pleasant questionnaire may well be market research. If it is or isn’t I have enjoyed doing it and thank you.

I can promise you that it isn't market research.  It's merely a way of allowing writers to publicise themselves and their work.  Speaking of work, would you be able to provide a short piece of your writing?

She carries two pots. One on each of her slender shoulders. The pots are old, heavy even without the water. They are her mother’s pots. Her mother is dead so now they are her daughter’s pots. She is barefoot. She has one dress of white cotton. When she bathes in the river the dress is also washed. She has no other clothes. She has no other possession. No comb, no bangle, no kohl, no mirror.

She is fifteen years old, counting from a mark her mother made on the mud wall of their house. She has no father. When the moon is half she goes to the special place with the other women. Four days and nights in the dank, dark heat and then she runs down to the river, never stops running till she is up to her waist and she sings and she sinks beneath the surface and she shouts and down river the fishermen stop at their nets hearing her laughter. She lies upon the bank in the sun and smiles as she dries.

But today she is carrying water. She carries it twice each day. For her family. Her aged grandfather and her brother and her sister who are to old or to young or to weak to carry water. She is strong.

On a certain night, on the night the moon is full and hangs over the river like another world, a milky world of still and quiet; on that one night in many she goes up to the mountain where the old people lived, the ones who knew the sky-men, and she can still see their caves, though the vines they climbed to reach the caves are gone. She climbs the rough walls and inside a cave she lifts a flat stone and there in a hollow lined with dove’s feathers, sits a small round ball. Her calabash. She hollowed it out herself, eating the soft sweet fruit and drinking the warm liquor till the gourd was clean and dry. She made a lid for it and she has dyed it all over with tea made from the crushed leaves of the Rooibos tree. She cups her calabash in her hand, in the palm of her hand.

She looks out at the moon. And she makes her wish.

Thank you very much Alan.
Posted by Rebeccah Giltrow at 11:53