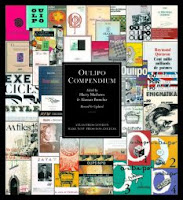 So today is the 27th of April, which must mean that it's the twenty-fourth day of the A to Z challenge.  I've decided to share my love of writing through this challenge, and hopefully introduce people to the world of Oulipo.  I first heard about Oulipo when I was at university, and I was fascinated by their approach to writing that I decided to delve deeper into the world of experimental writing.


"The relation x mistakes y for z was conceived by Raymond Queneau as a way of representing the way that several characters perceive each other (and themselves) in a given situation.  The relation is presented in the form of a multiplication table: a x a = a signifies 'a takes himself to be a'; x x y = z signifies 'x mistakes y for z'."

Yes, I am as confused as you are.  I have to apologise for this entry, but 'x mistakes y for z' was the only Oulipian constraint I could find beginning with X.  I've looked over this a good handful of times and it still hasn't become any clearer.  The examples in the Oulipo Compendium aren't much help either.  Maybe you can get your head around it!  I don't know whether or not it's just too mathematical for me, or I'm just being a bit thick! 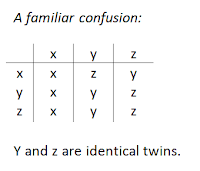 Harry Mathew's example comes with a piece of text for clarification.

"Napoleon falls in love with the wife of the man who thinks he is Napoleon.  The wife has always believed that her husband was Napoleon and therefore that she was Napoleon's wife, a situation she is determined to maintain, even if it means changing Napoleons.  The one constant is the wife, since Napoleon considers her his, and the other man believes her to be Napoleon's wife."  (Oulipo Compendium, page 247)

If you haven't gone all cross-eyed, I'll give you one last example for your brain to wrap itself around!

"Xavier loves Yolanda but is sure that Yolanda and Zita love each other.  Yolanda actually does love Zita but fears that Zita has a yen for Xavier, who she is convinced can never love anyone but himself.  It is Zita, however, who is content with being entirely self-centred; she also knows that Xavier loves Yolanda, believing furthermore that Yolanda loves Xavier."  (Oulipo Compendium, page 248)

Posted by Rebeccah Giltrow at 08:40

Email ThisBlogThis!Share to TwitterShare to FacebookShare to Pinterest
Labels: A to Z, Oulipo