Firstly, I have to apologise for not posting this sooner.  For some reason I forgot to write my usual blog post, following the writing group meeting.  I must be getting old!

Our homework for the past month was to write a piece inspired by a picture from a calendar. 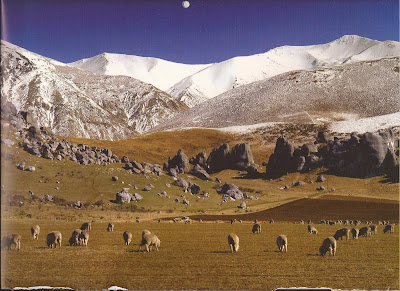 And decided to use it to write a poem.  After our Februrary meeting, I was inspired to write a poem.  A few members of the group read out some poems that they'd written previously, and that gave me some ides to turn on the poetic side if my brain which has been dozing on and off for quite a while.

Now, as most of you know, I don't like to make life easy for myself, so rather than just writing a regular, run of the mill poem, I decided to write a sestina.  This is a poem with a strict structure.  It's all explained on the wiki page.

And as the days pass by, the sheep
Graze beneath the darkening sky
And make their bed between blades of grass
Away from the high point peaks of snow
And while back and forth the world rocks
The scene stays steady as a mountain

The moon rises behind the mountain
As the world is counting sheep
And mothers are gently rocking
Their babies under a starlit sky
Protected from the wind, rain, and snow
That blankets the frightened grass

The land brings forth drought but grass
Breathes life through cracks.  The mountains
Keep watch, blinking as snow
Falls over their eyes, and blankets the sheep
Who till and tend and farm, as the sky
Changes colour to match the rocks

Worldly torment lands us between a rock
And a hard place but step through grass
And sand and water to feel as free as the sky
Dwelling birds that survey the world from mountain
Tops as man follows leaders like sheep
To the slaughter, leaving red stains on white snow

But as the sun shines bright through the grey, the snow
Melts and washes away they decay from the rocks
And cleanses the tired feet of the oblivious sheep
That pace back and forth, wearing tracks in the grass
Never knowing they could stand as still as mountains
To peacefully gaze at the wonders beneath the sky


Di set writing tasks for the group, but I didn't do them.  I was putting the finishing touches to our Anthology, along with the members of the group, checking our pieces for typos, missing apostrophes, and any other anomalies.  The book, entitled Colours of the Coast, should hopefully be published within the next month through Createspace.  I will obviously let you all know when it's available to buy.

Here is the cover, just to whet your appetite! 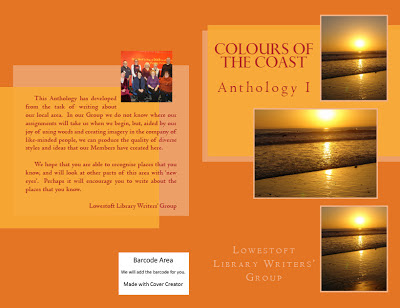 
Our next meeting will be Tuesday 9th April, and our homework for that session is to write about a place we know, using all five (or six) of our senses.
Posted by Rebeccah Giltrow at 11:09