I'd like to welcome you to my interview with writer, Roger Steer.  Enjoy. 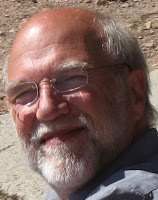 Hello Roger, can you please introduce yourself?

I am Roger Steer and I live and work in the village of Down St Mary in mid-Devon.

On 26 July 1972, as a young man of 27, I walked into the old Warwick Lane headquarters of Hodder and Stoughton in the shadow of St Paul’s cathedral.  I had fallen in love with the story of George Müller, a German who had come to my home county of Devon in 1829, before moving to Bristol and founding children’s homes which made his name a byword for faith throughout the world.  I had optimistically sent a draft chapter of what I hoped might be a new biography of Müller to Hodders for their consideration.
Six years earlier, at the age of 36, Edward England, had moved from managing the Scripture Union bookshop at 5 Wigmore Street, London, to become religious editor at Hodder and Stoughton.  I was ushered into his room to find that he had my draft chapter on his desk in front of him.  After a few pleasantries, he began (verbally) tear my precious manuscript to shreds and strike out phrases and whole sentences as I watched in horror.
‘Your draft is saturated with religious jargon,’ he told me, ‘and your opinions.  Your readers aren’t interested in what you think.  They want you simply to tell the story of Müller’s life in plain words.’
Edward never went to university.  He was a fan of Harold Ross, first editor of the New Yorker, who – Edward maintained – was largely illiterate.  This meant that Ross wanted everything explained and refused to pass a sentence from his journalists unless it was wholly comprehensible to him.  He instinctively distrusted pretentious or mannered writing.  Edward used to cite the example of John Wesley who, in his early days, had read his sermons to an old domestic servant, instructing her to interrupt when she couldn’t understand.  ‘I desire plain truth for plain people,’ Wesley had written.  ‘I labour to avoid all words which are not easy to understand, all which are not used in common life.’
Despite the evident shortcomings of my manuscript, however, Edward had been eager for some time to publish a new biography of Müller.  He walked across to his bookshelves and handed me a copy of God’s Smuggler by Brother Andrew.  Edward had published this in 1967 and it had already been reprinted many times.  The book told the story of how Brother Andrew had carried contraband Bibles past armed border guards to bring the love of Christ to people behind the Iron Curtain.
‘God’s Smuggler was ghost-written by John and Elizabeth Sherrill,’ Edward told me.  ‘It went through ten drafts before they were satisfied with it.  They worked on every sentence until they got it right.  They were craftsmen with words.  They told Brother Andrew’s story in a series of scenes where the reader could imagine himself present, see the scenery, hear the dialogue and smell the smells.  Dialogue breaks up the page.  If you can tell the story of George Müller in a style along the lines of the Sherrills I will take another look at your manuscript.  Go away and write four chapters and we will talk again.  And, oh,’ he added, ‘pray about what you are writing.’
I still keep that copy of God’s Smuggler close to my desk together with the notes I jotted down summarising the Sherrills’ writing technique.
And so I beavered at my four chapters for Edward.  I edited them over and over again – trying to incorporate as much as I could of the best of the Sherills’ techniques while trying to develop a style of my own.  I read Geoffrey Ashe’s book The Art of Writing which I still think is one of the best books for aspiring writers.  And I even remembered Edward’s advice to pray over what I was drafting.  At last I decided my four chapters were good enough and delivered them to Hodders’ HQ in Warwick Lane.  All I could do now was wait.
Four days later, the phone rang on my desk at the Monopolies Commission in Carey Street.  It was Edward England.
‘I like your chapters very much,’ he said.  ‘We will publish with enthusiasm.  And I am going to pay you an advance of £600.’
We had never talked about money and £600 was a decent sum in 1972.  When I delivered the complete manuscript, Hodders scarcely made any changes before publishing the book, George Müller: Delighted in God, in November 1975 and naming it their ‘Book of the Year’.
During fourteen years at Hodders, Edward rose to become director on the company’s main board and was responsible for commissioning or acquiring a series of bestselling books including The Hiding Place by Corrie ten Boom, Run Baby Run by Nicky Cruz and Chasing the Dragon by Jackie Pullinger.  He was responsible for bringing the New International Version of the Bible to Britain – a publishing coup which transformed the fortunes of Hodder and Stoughton.
But Edward had a horror of ruts.  A year after his success with the NIV, he left Hodders and became editor and publisher of the magazine Renewal which placed him at the heart of the charismatic world.  He set up his own literary agency, Edward England Books, and asked me to become one of his first authors.  He negotiated with the OMF for me to write a new biography of Hudson Taylor which was published in 1990.
He and his wife Ann entertained me in their home in Crowborough and came to stay with us in Devon when he addressed what was then known as the South West group of the Fellowship of Christian Writers.  After he died on 16 May 2010, nine days short of his eightieth birthday, The Times said that he had ‘dominated British Christian publishing in the second half of the 20th century’.  I,like hundreds of authors, and thousands of readers throughout the world, thank God for his remarkable life and for all he taught us.

I am member of the Devon Group of the Society of Authors and the Exeter branch of the Association of Christian Writers.

What genre(s) do you write?

You mentioned earlier that you've had books published.  Where can we find them?

My books may be seen by following the link to Amazon.co.uk at my website www.rogersteer.com

I keep more or less office hours and feel most creative early in the morning. When I am particularly busy I sometimes start writing between 4 and 5 in the morning and occasionally have worked all through the night.

There's a 4 and 5 in the morning?!  Do you have an editing process?

I think the craft of writing is all about editing. It is a continuous process of editing and, to my surprise, when I bought my first computer in 1985 I took very quickly to computerised editing.

In 2010 by biography ‘Inside Story: The Life of John Stott’ was one of three final nominations for Christian Book of the Year. This award was however won by Andrew White’s ‘The Vicar of Baghdad’.

What advice could you give to a new writer?

If you could have written anything, what do you wish that could have been?

Any novel by Jane Austen or Tolstoy my favourite two writers. I think they were both geniuses.

Yes, consider the genius of Tolstoy in Anna Karenina:
Prince Stepan Arkadyevitch Oblonsky (Stiva) has had an affair with a French governess. His wife, Dolly, has found a note which reveals that the affair has been going on. She is distraught and devastated. Anna Karenina (Oblonsky’s sister) travels fromPetersburgto visit the Oblonskys inMoscow, tells Dolly that she knows what has happened, and tries to comfort her sister-in-law.

What are you working on at the moment?

A magnum opus which will tell the whole story of Christianity concentrating on its most influential figures and most engaging insights.

Thank you very much Roger.

Posted by Rebeccah Giltrow at 10:19