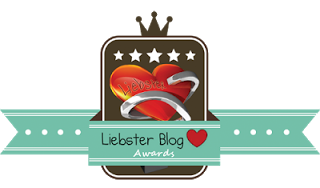 As you all know (I've been banging on about it for the past ages) I'm taking part in the A-Z blogging challenge throughout April.  I've been visiting people to say 'hello' and offer support for the upcoming month. While I've been wandering through blog-land, I noticed that a lot of people had been blogging about 'The Liebster Award', and was a teeny bit jealous that no-one had nominated me for the award.  You can only participate if someone else nominates you.  And guess what?!  I've been nominated *yay* by someone I visited for the A-Z challenge, and they visited me back.

The kind person who nominated me is Jak Cryton over at The Cryton Chronicles.  Thank you very much, kind sir.

As with all other blog-hops, this is a way of introducing bloggers to other blogs that they may not have seen before.

So, the rules are:

11 Random Facts About Me

1. What is your favourite colour?

Purple, although red does come a close second.

2. If you could have any superpower, what would it be?  Why?

3. If you were resurrected as an animal, what would you want to be?  Why?


I would love to be a dog in a great family, where I can sleep, eat, play, run around, and not have to worry about a thing!

4. What is the last book you read and/or currently reading?

I'm currently reading The Crimson Rooms by Katharine McMahon for my book group.  I've only read about 5 chapters but it's pretty gripping.

5. Who is your favourite author?

6. Have you ever participated in NaNoWriMo or the A to Z Challenge before?  If so, what were your experiences like?

I did NaNoWriMo for the first time last year.  It was something I'd wanted to do for a while but never thought I'd be able to do it.  If I'm honest, I didn't enjoy it.  I felt like I was under too much pressure and that I'd be a failure if I didn't finish it.  I never set myself targets when I write, and I manage to get more words down each day that I did throughout November!  This year is my first attempt at the A to Z Challenge, and I'm quite excited about it.

I'm not really a big film buff.  I do like films, but I never know what's coming out until it's already been released.  I have no idea what's due for release this year, but I'm sure I'll watch all the 2013 films when they come out on Netflix!

8. Who was your first movie crush?

9. What would your dream job entail?

I would love to be a full time writer, living in a secluded house where I would write uninterrupted.  However, there's always a chance that would end up like Misery, so I'd have to make sure that I never have any driving accidents in the snow!

10. Who has been the most influential person in your life?

I would have to say my parents.  They've always been supportive of everything I've done, and have helped me out whenever they could.

11. Do you believe in the supernatural?  If so, any experiences?

I know that things like ghosts and aliens don't exist, but I still can't bring myself to watch Supernatural Activity or any of the Alien films.  And you couldn't pay me enough to get me to watch The X Files!

11 Questions For The Nominees

Posted by Rebeccah Giltrow at 14:52