Today was the April meeting of the Lowestoft Library Teen Writing Group.  Only two people turned up, which was a shame.  But I guess as we are smack bang in the middle of the Easter holidays, people have plans.

Our homework from last session was to put your ipod (or mp3 player) on shuffle, write down the titles of the first ten songs, and use those titles in a story.  The titles that came up when I played my music weren't brilliant, but that's part of the risk, so I'm afraid there are a couple of cheats but I'm sure I can be forgiven for that.


I must have an odd taste in music, because not all of these songs can be found on YouTube (not that it matters; I just wanted to share them with you).

I hang up my phone after a brief conversation with my best friend, Carrie.  I drop back on my bed and stare up at the ceiling.  She sounded different.  Not that she has a normal way of sounding.  I could just sense something not quite right.  She wants me to go over to hers.  "Please," she begged.  "Please come and stay with me.  I don't want to be on my own."  I've never known her to beg for anything.

I don't really want to go and spend another night in the hills, in her spooky old house, miles away from any sort of life.  She likes the solitude.  It helps her with her art, she says.  It helps her get back to nature, she says.  I'm not so sure.  I fear that, before long, she'll be wandering through the wilderness, half-naked, ripping animals' heads off with her teeth.  I pack an overnight bag and get in the car.  I watch the remnants of my familiar suburban culture disappear into the distance in my read view mirror and I focus on the long stretch of road ahead of me.  My car stumbles along the bumpy, dirt track that leads to her house.

I find Carrie sitting on the porch, cross-legged, eyes closed, mumbling something that sounds like 'Om Nia Merican'.  I can't work out if she's meditating or has actually gone mad.  I walk past her into the house, and dump my bag on the sofa, which will fold out and become my bed in a few hours.  My duvet and pillow are already on the armchair.  Adina, Carrie's cat, weaves her way around my ankles.  I bend down to stroke her.

"I wouldn't do that if I were you," Carrie says, standing in the doorway.  She holds up a bandaged wrist.

She turns around and lifts up her top.  Her back is covered in blotchy, pink ridges.  I suck in a breath of air.

I don't want to know.

"Do you know what I've been doing all day?" she asks.

"Painting.  I've been painting.  Hours upon hours of sitting in front of a canvas.  And do you know what I've come up with?" she says.

"This," she says, dramatically pulling a sheet away from a picture.

"Oh," I say, squinting at it.  I want to be nice about her work, but I don't really understand it.

She nods, and looks defeated.

"So what was the urgency in me coming to stay?" I ask.

"I don't know.  I've just been getting stressed over these paintings.  I needed a break and someone to take my mind off everything," she says.

She smiles at me and takes my hand.  We walk upstairs and she pushes open the door to the room she uses to store her completed pieces.

"Just wait in here a minute, there's something I want to show you," she says.

I reach a hand around the door frame and turn on the light.  I've never liked going into dark rooms.  You never know what's hiding in there.  I walk over to her easel and look at the self-portrait.

"This is amazing," I tell her.

She's not there.  I sit on the windowsill and look out into the night.  The door slams shut behind me.  I turn to look and hear the lock click.

A piece of paper slides under the door.  There's no way out Robert, is scrawled in blue crayon.  I lean up against the door.  I can sense she's on the other side.

The lights go off and a record player starts up.  It's 'The Ballad of Michael Valentine'.  On repeat.

Today was a bit of a mess.  Firstly, the room we normally use had been double booked by the teen readers so there was a bit of sorting out to so there.  Secondly, as World Book Night is coming up, The Friends of Lowestoft Library have set up a tree where people can write about their favourite books on the leaves.  So I asked my writers to write a leaf.  They wrote about 'Matilda' by Roald Dahl, and 'Alice in Wonderland' by Lewis Carroll.  I still have to write my leaf.  I'll stick them to the tree when I'm at the library tomorrow. 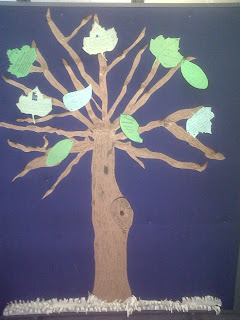 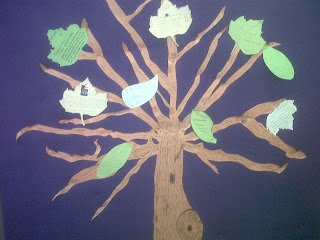 The book leaves took a lot longer than I thought it would, especially with only two people in the group.  So that only left us with about 20 minutes to do a writing task.  This month has been quite busy, and today zoomed up without warning, so I hadn't particularly planned anything for the writing task (tut tut me, I know, but I promise I will sort something better out for next month).  I just cut some pictures out of a magazine and asked them to choose one to use as inspiration.  As we only had a short amount of time, we didn't really come up with much.  Hopefully next month will be a bit more organised!

I picked a picture of a family camping.  Sorry for the bad quality of the image, I took a picture of it with my phone and they don't always come out very well. 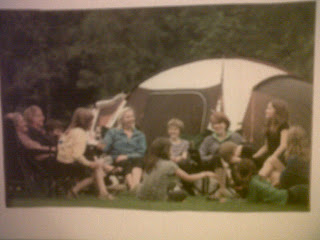 Dad and Uncle James were fighting with the tent poles; as soon as one side of the tent was up, the other side fell down.  Mum and Aunt Jane were standing over the barbecue, turning suspicious looking sausages, black on one side, pink on the other.  My cousin, Ed, was sitting on a tree stump, pulling out blades of grass and eating them.  His sister, Joanne, was running around in circles, swinging her doll by its hair.  I was looking through the tool box in the back of James' van and planning on how I would kill them all in their sleep.

Hmm, a bit of a morbid month for me there.  And I'm afraid it's going to continue as the homework is about life and death, to write a piece where something/someone is born and something/someone dies.  It can be a person, an animal, a plant, an idea.

We will be meeting again on Monday 13th May, 5pm-6pm, in the Library cafe.
Posted by Rebeccah Giltrow at 21:35