I'd like to welcome you to my interview with writer, Daniel Morley.  Enjoy. 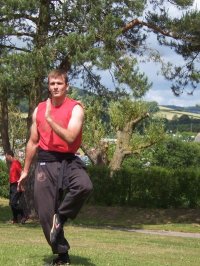 Hello Daniel, can you please introduce yourself?

I'm Dan Morley based in Stoke on Trent, England.

About three years. The first two consisted of extensive procrastination with the glacial pace of a chapter every few months. This last year or so, I ramped up the effort and dedication, finished a novel, half a sequel and a few short stories.

Every great writer is a procrastinator first.  What first got you interested in writing?

All important parts of critique.  Why do you attend a writing group?

Feedback! Feedback is brilliant. In part it can give you confidence that what you’ve written is worth reading and points out where things could be improved. My goal is to wring the best out of every story I write and for that I need to know how my readership reacts. For example, when reading to your group, you know your jokes work when people are laughing.

What is the most valuable thing you have taken away from your writing group?

Active voice. I wracked my brain around this one for hours until it finally clicked. It transformed my writing, made it more progressive, evocative and shorter.

You mentioned earlier that you write fantasy.  What drew you to this/these genre(s)?

Fantasy. I edge toward the lighter, humorous side with loads of action because that’s what I want to read. I grew up with the genre and find it fires my inspiration more than any other. I’ve dabbled in sci-fi but would usually take a sword over a spaceship.

Are there any genres that you don’t enjoy writing?  Why?

I wouldn’t go near romance because I’m clueless.

What types of things do you write?

I focus on novels but throw the odd short story out there every now and again. They give a nice break from a longer work.

Have you ever had anything published?

Not yet but it is early days. Publication is the immediate goal. World domination can come later. Some stories I write for the fun of it and worry about publication after, if at all.

Have you sent your writing to agents/publishers?  Have you received any rejections?

Yes and yes. I have a novel and two short stories under submissions.

There are so many great writers out there and only so many agents/publishers so rejection is part of the journey. It’s an important part, too. It helps us grow and battles complacency. My first rejection came from I short story that I sent to Tor. In hindsight, it wasn’t ready. While the story was under submission I scaled a steep learning curve and, armed with newfound writing skills, I edited the manuscript, stripped 2000 words and submitted elsewhere. It’s a much better story for the process.

Would you consider self-publishing/e-publishing?  Why/why not?  Are you interested in eBooks, or do you prefer the old fashioned paper-made books?

I recently joined the digital age and bought a kindle. With a full-time job in IT, I stare at monitors all day and I’m fond of my eyesight so I’d avoided e-readers. Eventually I tried a kindle and since it’s not backlit, it’s fine on my eyes.

There’s much to be said for physical books but we have to move with the times. Ideally, I’d like to publish in both paper and eBook formats.

Who/what influences your writing?  Where do you get your inspiration from?

Inspiration comes from everywhere. Music is often prompts my creative side and makes me want to sit down and write.

How do you come up with your characters’ names and personalities?
What is the best piece of writing advice you’ve ever been given?

What advice could you give to a new writer?

Write regularly, get feedback and read books on craft. Oh, and write what you enjoy.

I don’t have a routine. My non-writing life is quite busy so I grab snippets of time as and when I can but manage at least something every day. This made the most significant difference to my productivity. Once, I thought I needed a particular atmosphere, to be inspired, but all I actually needed was sit down, stop being so pretentious and get on with it.

Do you start out with a complete idea for your stories, or do you just start writing and hope for the best?

Starting with a vague idea works best for me. Most of the details fill themselves in as I go along. Characters have a tendency to say or do things which reveal avenues to explore.

Do you have an editing process?

I’ll go through a chapter about seven times before I consider it a first draft. After that I read it aloud and post it for feedback. The process repeats until I’m happy that it’s the best I can do at the time (we keep improving).

That's pretty much my editing process.  What do you enjoy the most/least about writing?

There’s a sense of achievement that comes with having created something. In work, you don’t always have something to show for what you’ve spent your time doing, whereas with writing you can see words on a page.

Some days are tougher than others. Sometimes a chapter does not want to be written and can be a slog.

Have you ever attended an open mic night for spoken word performers, and either an observer or a performer?

Just one but I didn’t hear anything back. It was a fun exercise nevertheless.

How important is it for you to share your writing?

For me, sharing writing is essential. I like to have a purpose in what I do so if I write something I want someone to read it. It’s important to remember that tastes and perspectives differ so you’re never going to please everyone.

If you could have written anything, what do you wish that could have been?

Wheel of Time by Robert Jordan. This story has engaged me more than any other, caused sleepless nights starting with the words, “just one more page,” and inspired me to pick up a pen.

What types of things do you read?  Do you think your writing reflects your book tastes?

I’ve always been drawn to fantasy although I took it upon myself to read out-of-genre this year which has been an enriching exercise. Suspense, horror, steampunk and sci-fi have all entertained me of late. They also provided transferrable skills for my own writing (even if I wish I could turn my internal editor off at times), for example, the Hunger Games taught me some useful techniques for handling suspense.

“Fortune rides like the sun on high,
With the fox that makes the ravens fly.
Luck his soul, the lightning his eye,
He snatches the moons from out of the sky.”

What are you working on at the moment?
Where can we find you on the internet?

I have a fledgling blog at: http://danmorley.storytellersinn.com/
My Twitter account was initially intended as a personal one but after a couple of publishers started following my feed, I decided I ought to behave and use it for writing: https://twitter.com/TolSenti

Give a writer an open question like this and he’ll probably talk forever. I’ll restrain myself.

Would you be able to provide a short piece of your work?

Here’s an excerpt from one of my short stories called The Adventurer’s Guide to Dungeoneering. It’s aimed at a role play gaming audience but this part should be accessible to those who have read a little fantasy:

Unlike Sarina, Noon arrived right on time.  Gerith and the other three loitered outside the inn, overflowing with testosterone.  Reg plucked at a battered old lute, repeating  ‘me’ in a range of irritating voices while Jinther spent the morning chasing oddly shaped objects that kept falling out of his black cloak, including one that splashed water over his boots.  Seth sat on a rock, staring at a huge grimoire that looked like it had been carved from the face of a demon and gathered years of dust before falling in a bath.  His face contorted so much it almost formed a question mark.
“I thought you might have wanted the warrior’s job, given all those muscles,” Gerith said, concealing his own rather pitiful spellbook.  Actually, it was the guestbook from The Peddler’s Pantaloons with what Sneaky Pete assured him was a powerful scroll shoved between the middle pages.
“Nope.  Always fancied myself as one of them smartypants types.  Reckon I could shoot fireballs with the best of ‘em.  Robes are a bit tight though.  By the way, do you know what these picture things mean?  Can’t read a word.”
Gerith rolled his eyes and rifled through his pack for the sword he’d brought just in case.   “Damn useless multi-classes,” he muttered.
“Hallelujah!” Reg cried.
Gerith extricated himself from his pack and his jaw dropped.  Sarina, wearing next to nothing, grinned at him.  A tiny metallic…thing…sort of covered her chest.
“Hi folks.  I did some research and it turns out clerics wear armour.  Lecherous Surj gave me this—what do you think?”
“You are aware the point of armour is protection?” Jinther said.
“It lifts and supports!  Look!”
Gerith’s skull barely held onto his eyes as she stuck her chest in his face.

Thank you very much Daniel.
Posted by Rebeccah Giltrow at 19:32