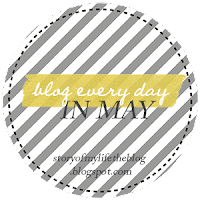 At a loose end?  Don't know what to do with yourself now that the A-Z blog challenge has finished?  Why don't you Blog Every Day in May?

Day 2, Thursday: Educate us on something you know a lot about or are good at. Take any approach you'd like (serious and educational or funny and sarcastic)


I've always enjoyed baking, and my love for cake making began when I was little and I'd make a mess in the kitchen with my mum.  We'd make chocolate cornflake cakes, and rock buns, and scones, and those cupcakes from a packet with coloured icing and sugar paper toppers.  But my favourite thing to make was mince pies at Christmas.  It was always a special time for us and I looked forward to December so that we could fill the house with a Christmassy smell.

MINCE PIES
(From the Mrs. Beeton’s All About Cookery and the Miss Giltrow Cook Books)

Weigh out ½ lb. of flour.  If possible, pour too much flour out of the bag, spilling a lot of the contents all over the worktop, floor and dog.  The best thing to do is cover the dog with flour so that it traipses white footprints through the house. Attempt to spoon the excess back into the bag.  Leave the flour on the floor and dog.  Do not use this in the pastry, but clean it up later (or leave it for the dog to eat up).

Once the correct weight of flour has been measured out, “sift … the flour” using either a hand sieve or the pulse setting on a food processor.  Using the hand sieve is an effective way to cover the worktop, floor and dog with flour if the weighing out of the flour did not provide the desired messy results.

Weigh out 2 oz. of butter and 2 oz. of lard by hacking at them both with a knife, pinging shards of solid fats around the kitchen.  Again, if possible, allow some butter and/or lard to come into contact with the dog so that this can also be traipsed through the house.

If making the pastry by hand, “rub the butter and lard lightly into the flour, using the finger-tips.”  Remember to squash some of this mixture into your hair without realising and forget about it so that it turns into a solid lump to be painfully discovered at a later time.

“Mix to a stiff paste with cold water” and a bit of muscle power if using the traditional bowl and wooden spoon method.  Dribble the water in, but ensure that this water spills on the worktop, floor and dog as usual.  Water can also be spilled all over the place when using the food processor just by being a bit careless and not watching what you are doing.

Once the pastry has been formed into a ball, not too sticky, not too crumbly, wrap it up in tin foil and leave it in the fridge for about 15 minutes.  After this time, remove the pastry and cut off 1/3.  Put this to one side.  Cover the worktop and rolling pin (plus floor and dog) with flour and start to roll out the 2/3 of pastry.  Ideally, a nice, even pastry is best, but to add a bit of variety into your life (and in turn your pies) ensure that the pastry is paper thin at one end and about 2 inches thick at the other.

Take a large-ish cup, place it on the pastry and cut around it with a reasonably blunt knife to make circular shapes (or shapes that attempt to resemble a circle) which will become the pie bases.  Take a baking tray and either over grease it with butter so that the pies don’t stick and are easy to remove once cooked, or under grease it so that the pies do stick and are difficult to remove once cooked, resulting in a burnt mess of pastry and mincemeat gloop that needs to be scraped out with a chisel.

Put the pie bases into the baking tray and “place some mincemeat in” each one.  ‘Some’ has no specific dimension, but the suggested measurement is two heaped teaspoons of mincemeat so that it overflows out of the pie bases when in the oven.

Take the 1/3 of pastry and roll it out in the same way as the base pastry (uneven and lumpy) and use a smaller cup to cut out the lids.  Slop some milk into another cup and brush this milk onto one side of each lid, then “place a lid on top of each” pie and “press the edges well together.”  Some mincemeat will squirt out of the sides but don’t worry about that; it can be cleaned off after they are cooked.

Brush milk onto the top of each lid and then “sprinkle with sugar.”  A heaped teaspoon of sugar constitutes a ‘sprinkle’ and while sprinkling make sure that the sugar goes all over the place.  The mess isn’t too much of a problem as the dog can eat any food scraps that have fallen on the floor.

Repeat this process as many times as desired.  When happy with the look and temperature of the pies, eat and enjoy.

Serving Suggestion:    Lavishly drizzle hot custard over the pies then decorate with
half a can of full fat squirty cream.  Mmmmm.  Delicious.
Posted by Rebeccah Giltrow at 11:52